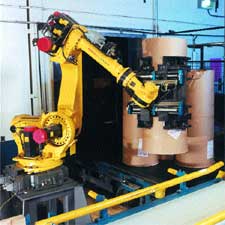 When a leading robot manufacturer needed big grippers to move large rolls of fiberglass insulation, they called ZAYTRAN. Their customer wanted to automate a packaging application in their multiple warehouse facilities. Currently humans were lifting 120+ lbs. rolls of insulation off of a conveyor and placing them onto a pallet. This practice was taking a toll on the backs of their employees. Work related injuries were on the rise and downtime skyrocketed from the resulting missed workdays due to injury.

At first the application seemed fairly simple. Just move large rolls of insulation off of a conveyor, stack them on a pallet and repeat. Then, it was decided that to truly make this robot cell cost effective we should not only automate the palletizing of the large rolls but also the small rolls. This would require the use of two grippers not just one really big gripper. While we were studying the application requirements we also realized that once the robot moved the insulation off of the conveyor the grippers would continue to compress the insulation while the robot was moving the insulation to the shipping pallet. This would impart a high dynamic moment load on the gripper and so a special gripper will be required.

Recommended for the application were 2 XRAY-1250-350 grippers. Each of these grippers produces 280lbs of force and has 350mm of total jaw travel. The long stroke will allow the grippers to be able to move both the small rolls and the large rolls of insulation with out changing the custom jaws. 280 pounds of force will be more than enough to handle the small rolls. Since the two grippers will be working together to handle the large rolls, a combined force of 560lbs will easily handle a 120 pound roll of insulation. This solves all the major issues of the application except for the dynamic moment load being applied to the grippers. To overcome this obstacle we added a high torque linear bearing rail to the side of each of the grippers and tied this bearing rail to the gripper’s jaws via 2 steel plates. The addition of the linear bearing rail allowed the grippers to handle twice the torque as the standard XRAY and added less than 10 pounds of mass to each of the grippers.

Since this was the first robotic cell installed in the end users facility, the skeptics were abundant. After the first month of use, the robot and grippers did not miss a single roll of insulation that traveled down the conveyor and better yet caused zero down time. Statistics like these helped silence the skeptics and draw the support of upper management. This was truly a success for all, the end user the robot manufacturer and the grippers.

In the end all parties were happy. The end user received a robotic cell that increased output and virtually eliminated the work-related injuries and the resulting downtime. The robot manufacturer received a multimillion-dollar purchase order to build automated packaging cells for the 10 other warehouse facilities the end user has in the United States. ZAYTRAN received the order for the upcoming packaging cells. ZAYTRAN also turned the special grippers from this application into what has turned out to be a very successful standard product line.

Do you have an application, which imparts force on a gripper while the jaws are still moving? Call ZAYTRAN, we have a standard solution for your non-standard application!