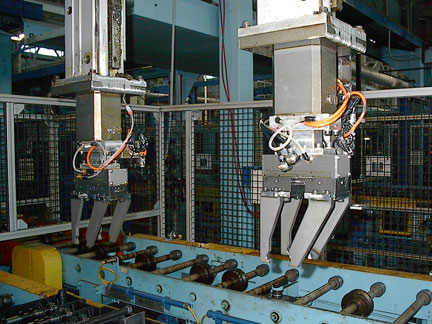 When a “Big Three” automaker needed to replace failing grippers they were using in one of their engine assembly plants, they called ZAYTRAN. They were referred to us after touring another “Big Three” auto maker’s facility that used ZAYTRAN grippers.

The customer needed to update a camshaft machining line. Currently they were using, let’s call them “Brand S,” grippers that needed to be replaced at least every month. The replacement cost for the grippers was $1,500 dollars per unit, not to mention what the downtime was costing them. They wanted to know if ZAYTRAN had something better to offer them. Of course we did.

They explained that their application was a very dirty environment, where the grippers would be mounted on gantry robots and would load and unload lathes and grinders. They further explained that the camshafts were at the heaviest 20 lbs. and the jaws would have to be at least 12 inches long due to the way the gantry had to reach into the grinders. The only other stipulation was that our gripper could not be longer than 6 inches due to space constraints from existing machinery.

We recommended Magnum AL-450-26 grippers for this application. The Magnum AL-450-26 is 5.7 inches long, just small enough to fit into the size envelope. This gripper is also equipped with a patented purge system. The purge system allows positive air pressure to be applied directly to the bearing surfaces of the gripper so that any abrasives, grinding dust, chips, coolant, etc will be cleared from the bearing surface to extend the life of the gripper. The Magnum AL-450-26 has 100 lbs. of grip force, which will be more than enough for the 20 lbs. camshaft. All the Magnum grippers are fitted with wide stance bearings, which allow the grippers to tolerate long jaws and high accelerations.

Of course the customer wasn’t just going to take our word for it, they wanted to test them. The test was supposed to last two months, if we were able to survive in this grueling environment for two months we would get the job. We didn’t last for 2 months we lasted 12 months! Even after 12 months in the nasty environment, all the customer had to do was a simple seal kit and bearing kit change and the Magnum grippers go right back to work.

Since list price of the ZAYTRAN grippers is less than half the cost of the “Brand S” grippers and the ZAYTRAN grippers last 12 times longer, the customer saved over $200,000 in the first year alone. This was just the first year and one project, the following year we got involved in several other projects at this facility. After, the first 2 years of working with ZAYTRAN the customer was saving an estimated $1.2 million per year by just switching grippers.

Do you want to save $1 million per year on tooling/downtime costs? Call ZAYTRAN we can help.